Know The Law: Knife Carrying Laws In California Before Buying

Before buying a penknife in any state in the USA, you need to know before hand whether owning one is legal or unlawful in your state and what are the laws, rules or guidelines governing these knives. It is vital to your compliance with the law and your duty as a law abiding citizen to do so prior to you decide on purchasing the knife. Constantly understand knife carrying laws in california to be safe.

A pocket knife as defined by Wikipedia is a foldable knife with one or more blades that fit inside the handle that can still fit in a pocket. This pretty much sums up what all of us believe to be a foldable pocket knife.However, as in everything that affects our lives the law has a way of complicating things. Did I hear someone say, “to give the lawyers work?” I will not get into that but you know what I mean.

Now when you get into the laws, you first have to read what the law says is a knife or in other words what is the legal definition of a knife. Definition varies from state to state and even from county to county in respective states. What may be illegal in one place might be totally legal in another. Always check the respective State or county’s knife laws before you travel, therefore avoiding unnecessary confrontation with authorities in those areas. Here is a document giving you all the relevant laws by State or County.

Additionally, you should also know the jargon that goes with knife ownership to safeguard yourself from being outside the law. Things like carry and ownership law, edc, fixed blade, folding knife, switch blade, daggar , stilletto, gravity and bowie knife. Below is a short explanation of these terms.

Knife Laws Jargon in the State

Fixed blade: A knife that doesn’t fold with no mechanism to do so. Eg: kitchen knives

Folding Knife: A knife whose blade folds and is concealed in its handle.

Carry Law: Plainly put a law which states what knife you can carry outside your home

Ownership Law: This law states in a nutshell what you can and cannot own even at home

Gravity Knife: A gravity knife is a knife with a blade contained in its handle, and which opens its blade by the force of inertia or gravity.

Switchblade: This appears to be the boogeyman of knives and if you read this page here you know I love this knife it was my first. But it is defines as “A switchblade (also known as an automatic knife, pushbutton knife, ejector knife, switch, Sprenger,[1] Springer,[2][3] flick knife, or flick blade) is a type of knife with a folding or sliding blade contained in the handle which is opened automatically by a spring when a button, lever, or switch on the handle or bolster is activated.” Wikipedia – https://en.wikipedia.org/wiki/Switchblade

Are switchblades illegal in this US state?

Gravity knives are banned by the Federal Switchblade Act.  Ballistic knife: A knife with a spring-loaded blade that can be “fired” from the handle like a missile. Currently illegal under federal law.

Despite this manufacturers have been bending the rules by renaming, re-engineering and manufacturing different knife types; to beat the various the laws and have in recent times been pushing the envelope a bit.

Assisted-Opening Knife: An assisted-opening knife is a type of folding knife which uses an internal mechanism to finish the opening of the blade once the user has partially opened it using a flipper or thumbstud attached to the blade.

Stiletto: A stiletto (Italian: [stiˈletto]) is a knife or dagger with a long slender blade and needle-like point, primarily intended as a stabbing weapon.

Dagger: a short knife with a pointed and edged blade, used as a weapon.

Where can you safely carry a knife without fear of prosecution and where would you be prosecuted if you carry one. Well as previously stated each State has its own restrictions and exemption, so if unsure it best to check the law for that particular state to be on the safe side.

Illegal / Legal by States in alphabetical order: (check state law to be on safe side)

Now this list only states whether you can carry a knife or not it makes no claim as to the type or whether it must be concealed or unconcealed. As have been said, check state laws first. Additionally, from time to time new rules and or regulations come into play and what is illegal today maybe legal tomorrow. Always check the updated pocket knife laws in your state.

Are Pocket Knives Legal In California 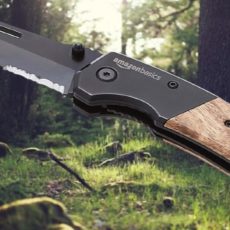 Is It Legal To Carry A Knife On Your Belt?

Are Automatic Knives Legal In Arkansas